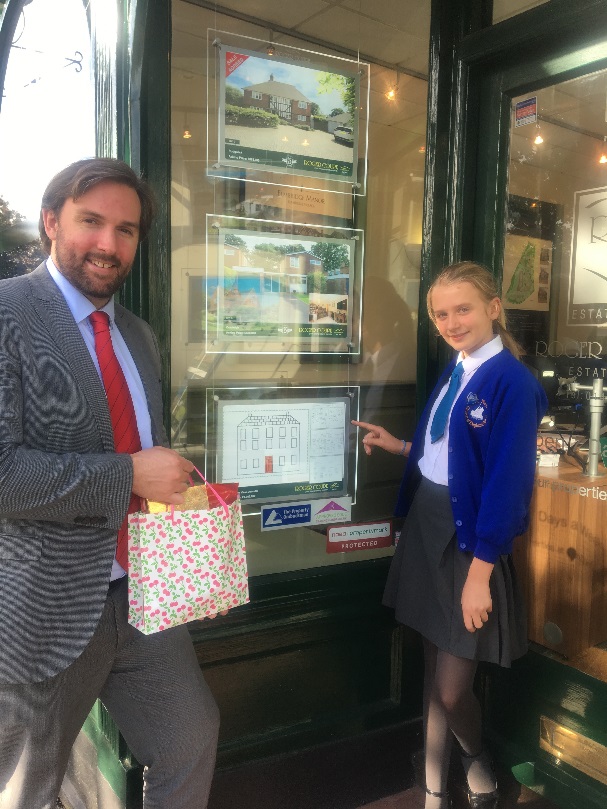 Ten-year-old Daisy Sullivan has been named as the winner of Roger Coupe’s dream home competition, after entering her detailed plans of a stately Georgian mansion. The competition saw children from around the area submit their imaginative entries to the Cranleigh-based estate agent.

Daisy’s ‘beautiful Georgian mansion’ has an asking price of £1.7 million and is set ‘in the grounds of 3.5 acres’ which include a tennis court, a sand school and paddock, a swimming pool, a spa hut with a sauna, and ‘a miniature fairy castle’ to be used as a playhouse.

The house itself has six bedrooms, four of which are en-suite, along with nine reception rooms and eight entertainment rooms. On the ground floor you will find a lounge, a kitchen and dining room, as well as a gym, a library, a cinema room, a reptile room and a secret den, while the bedrooms can be found on the first and second floors. The upper levels also include a relaxation room, pottery and beauty rooms, a dedicated arts and crafts room, and a rooftop jacuzzi.

Daisy was presented with a £20 book voucher and a goody bag of other prizes for her winning design. She said, “I’m very proud of my design and I’m really happy that it managed to win the competition.”

James Britton, a partner at the firm, said, “We would like to thank everyone who entered the dream home competition. Daisy’s great attention to the finer details combined with her vivid imagination made her a winner in our eyes.  In fact we want to move into her dream home!

“We work to help people find their dream homes, and I think it’s safe to say that Daisy’s design would be a dream come true for many people - it’s a house we would be very proud to sell at Roger Coupe.”

The full design, including detailed floorplans, can be seen on display at the Roger Coupe offices in Cranleigh.